Internationally renowned trial lawyer John Paris plays to win, both in and out of court. For Karen Lukoff, John’s young associate, losing has never been an option either. Together, they are a litigation juggernaut. John’s nephew Dan Burks, inherited his uncle’s tenacity and determination, and wants to prove he is every bit as good as Karen.

After a major lawsuit victory, John’s firm celebrates the win as hard as they fought for it. In the drunken morning hours, left alone, John and Karen collide in a high-octane moment that will cause everyone—including the audience—to question what they know about desire, consent, winning, and losing. And ultimately, they are faced with the question: is the law really on your side?

Tony Award winner, John Wulp writes of Margery Kempe, an English mystic who lived in the 1300’s. She fancied herself to be extraordinary, and she wanted the whole world to be aware of this fact. She first tried to make herself notorious by throwing her lot in with the Devil and buying a brewery. When this failed she decided to pursue an opposite tack and elected to become a saint instead. Although she had no real qualifications for the job, she worked at her new career diligently. Her quest for saintliness set her free from the sexual demands of her husband and the needs of her six children. She was free to roam the world performing bogus miracles. Eventually she even made a tour of The Holy Land.

From the author: “Margery Kempe is a universal figure. In her desire to give meaning to her life, she embodies the human condition. I see in her the material for comedy, but it is a loving comedy. Although I wrote the play more than sixty years ago, it is amazingly contemporary. In her refusal to let her life be defined by men, Margery Kempe is a uniquely modern woman. But if she is timely, she is also timeless. The discrepancy between ambition and ability has always been the stuff of comedy.”

The Cast of The Saintliness of Margery Kempe

Playing in the Loreto Theatre at

The Sheen Center for Thought and Culture
10 Bleecker Street in New York City.

They were average teenagers with above-average grades and varied interests  — track star, basketball star, jazz impresario, aspiring theater actress, Shakespearean, aspiring attorney, teacher and resident comedian. They wanted access to the best facilities, best books and best teaching instruction that their capitol city offered. They would agree to sacrifice sports, music, drama club and any other extracurricular activities that would lend itself to unnecessary race-mixing, in order to do so.

Their quest might have been otherwise unremarkable and gone unnoticed — had they not been in the Jim Crow South with a defiant Governor willing to violate federal law (Brown vs Board of Education) to integrate schools.

Told in memory, Little Rock artfully hurtles between past and present, challenge and triumph, hate and hope. It examines the unintended efforts of nine brave American teenagers forever thrust onto the national stage, unwittingly becoming agents of social change in the process — igniting the passions of a nation in the early dawn of the Civil Rights Movement, forever changing the face of education in America and giving hope to millions around the world in the generations to follow.

They never planned to be change agents.

They didn’t consider themselves heroes.

They just wanted to go to school.

This roller-coaster of a show captured audiences in New York City and Washington like none other. Everyone was talking about this unique tour-de-force. Everyone was leaving the theatre in awe of what they had just witnessed. Everyone was speechless. Some reviews from the New York Production at The Loft at the Davenport Theatre:

“In recent years Ed Dixon—actor, writer, composer—has delivered two of the most wrenching literary stomach punches I’ve ever received: punch one with his autobiographical memoir, Secrets of a Life On Stage… and Off, which I read a few years ago, and punch two with his incandescent performance in his play Georgie, which just opened at The Loft at the Davenport Theater. In both cases, the punch was swift, unpredicted and straight to the gut.” Glen Roven – Huffington Post

“It has been said that theatre at its most basic is great storytelling. Georgie: My Adventures with George Rose is an exhilarating story, and indeed brilliantly told.” – BroadwayWorld

“… a first class ticket on a theatrical time machine ride. We get to sit at the feet of a great storyteller getting punch drunk on theatre memories. Brilliant text, astounding performance, astute direction – unforgettable evening.” – New York Theatre Guide

“Dixon is priceless….he holds you in his thrall for the entire 90-miniutes and proves not only a great interpreter of Rose’s life and work, but a worthy successor to his stage presence.  Oh, what a relief!” – Michael Musto – Out

“As the story progresses, the jovial, sunny performance he delivers begins to morph into a rigid and deeply sad one by the end. Director Eric Schaeffer guides this multifaceted performance into a beautifully appropriate balance of lightness and darkness. Yet even as such a horrible story comes to life before our eyes, it’s clear that no matter what, Dixon still respects his late mentor, even if his feelings now are weightier and more complicated than they were when the two first met. Georgie is a tribute to one of Broadway’s greats, while reminding us that everyone we see onstage has a story all their own.” – TheatreMania

“Hugely funny, and masterfully constructed.  For an actor, seeing this show is one of those times when you remember why you got involved in the first place.” – McPhillamyActoBlog

“A lot of people, especially on the left, have forgotten the importance of humor as an incredible weapon, and a vehicle through which to affect change.”   —Michael Moore

They say that comedy is tragedy plus time. After over 100 days of Trump, the creators of 2006’s acclaimed musical revue Bush Wars  declare that, it’s time! Their new show, ME THE PEOPLE—The Trump America Musical, is an uproarious entertainment that takes aim at the embarrassment that is the topsy-turvy presidency of Comrade Donald J. Trump.

From his Crony Cabinet, to his Supremely Radical Court, White House grifters Ivanka and Jared and of course, the Trumpcare debacle, no one is spared. ME THE PEOPLE also offers a hilarious diagnosis from Sigmund Freud and a tour de force earful from Hillary Clinton.

A NEW SHOW FROM THE PEOPLE BEHIND
THE 2006 HIT, BUSH WARS

Set in an NYC rehearsal room, DEAR JANE journeys into the life of a passionate artist, Julie, who explores the many divergent paths of her past. From her fractured relationship with her identical twin Jane, to love affairs, questionable parenting skills, and her time as a political activist — she strives for something beyond our boundaries, reaching for art as the ultimate expression of meaning.

A Note from the Playwright, Joan Beber:

Dear Jane is my most meaningful play. About me and my identical twin, She died ten years ago. We adored and hated and adored each other. She was first born and first to die. She was everything to me.

She teaches me how to live and how to die.

I always think: what would Jane do or say.

“Let me not then die ingloriously and without a struggle,
but let me first do some great thing that shall be told among men hereafter.”

The Aquila Theatre and American combat veterans/actors of the Warrior Chorus collaborate on a unique theatrical experience – Our Trojan War, where the classic myths of ancient Greece and Rome are set against the compelling narratives of modern war.  Our Trojan War performances and workshops for veterans, their families and interested community members.

Workshops: Exact times are to be announced.

Our Trojan War uses epic moments from Homer’s Iliad and scenes from other classical Greek drama and poetry to propel a thrilling chronicle of men and women at war. The clash of gods and heroes, the rage of Achilles, the suicide of Ajax, the fall of Troy and the rise of Rome are among the many stories of war and homecoming told by the Aquila Theatre alongside members of the Warrior Chorus.

Additionally, Aquila Theatre will be holding veteran-led Warrior Chorus workshops at these venues around the performance dates. Using classical texts like The Iliad and The Odyssey, these workshops will encourage a deeper level of understanding between the veteran and civilian communities, generating honest and constructive discussion through the power of storytelling. Workshops are open to active members of the military, veterans, spouses and significant others, parents, high school and adult-aged children, and anyone who wishes to gain a better understanding of the military community.

The Warrior Chorus is a national program that brings together men and women who served in the United States military and trains them to the highest level in the performing arts and humanities. The Warrior Chorus is Veteran-Made American Art and is supported by a major grant from the National Endowment for the Humanities. The program is hosted at New York University, Columbia University, The University of Texas at Austin and The University of Southern California.

You’ve never seen Austen like this! Called the “greatest stage adaptation of this novel in history,” this rollicking, ingeniously-staged new adaptation follows the adventures (and misadventures) of the Dashwood sisters – sensible Elinor and hypersensitive Marianne – after their sudden loss of fortune.

Bursting with humor, emotion, and bold theatricality, ‘Sense and Sensibility’ asks: when reputation is everything, how do you follow your heart?

“It’s by far the smartest Jane Austen adaptation to come along
since Amy Heckerling’s Clueless, and at least as much fun.”
– Wall Street Journal

Check out the photos from the Production! 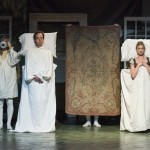 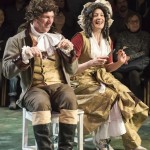 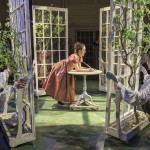 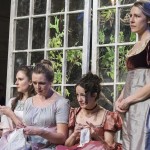 ​Get set for an evening of cheesecake, laughter, jazzercise, shoulder pads, sex, and the elegant art of the quick-witted put down.

​From Sophia’s get-rich-quick schemes, to Rose’s tales from St Olaf, Blanche’s insatiable hunt for men and the Fountain of Youth, to Dorothy’s daily struggle make sense of her life, keeping her roommates in check–while fending off a certain, pesky ex-husband, once and for all.

​Devoted fans will fondly remember our four girls from Miami, and for the first-timers, this will be a joyful introduction to the brilliance of that television series.

Created and Directed by Jonathan Rockefeller