In the Continuum puts a human face on the devastating impact of AIDS in Africa and America through the lives of two unforgettably courageous women. Living worlds apart, one in South Central LA and the other in Zimbabwe, each experience a kaleidoscopic weekend of life changing revelations in this story of parallel denials and self-discoveries. 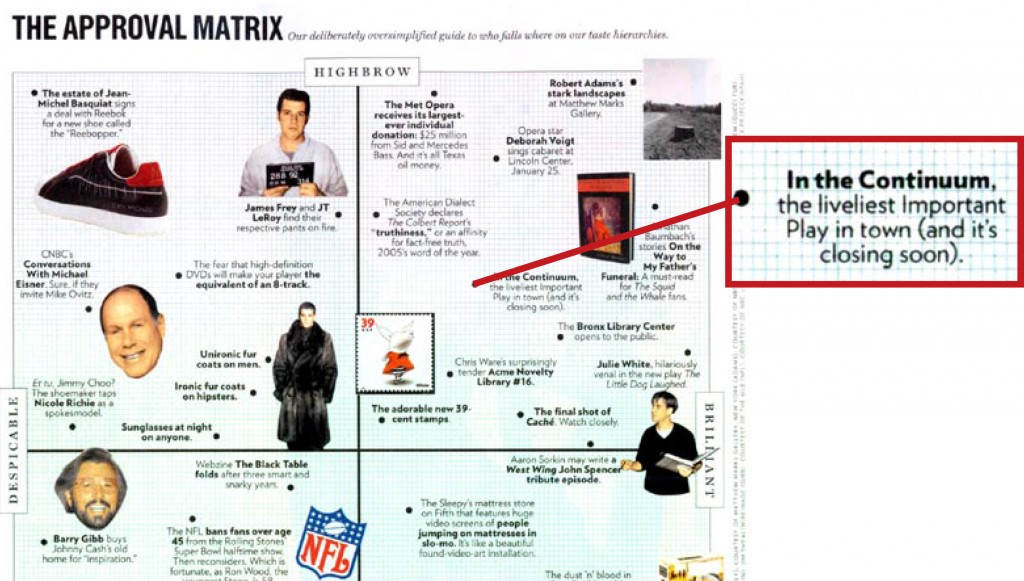 “ONE OF THE HIGHLIGHTS OF THE FALL OFF-BROADWAY SEASON! MOVING, SMART, SPIRITED, AND POWERFULLY FUNNY! THE FIERCELY TALENTED CAST IS FLAWLESS! Authors and performers Danai Gurira and Nikkole Salter possess the strong presence and confident technique needed to bring out the subtle force and potent flavoring in their writing. As worthy as In The Continuum is, it is not a downer – the disturbing points the play gently makes about the status of black women both in America and in Africa are humanized with such emotional vibrancy that the play leaves little aftertaste of sorrow. In The Continuum leaves behind a warm afterglow of human struggles explores, illumined, and embraced. IT PULSES WITH LIFE FROM START TO FINISH!” – Charles Isherwood, The New York Times

“UNFORGETTABLE THEATER!” IN THE CONTINUUM resounds in that space between the unique and the universal, insisting the onstage world can quickly become its own. ALTOGETHER ENGROSSING!” – Mark Blankenship, Variety

“A MUST-SEE EVENT! EARTHY AND STARTLINGLY FUNNY! Danai Gurira and Nikkole Salter are stars in the making and I expect it won’t be long before you’ll have to fork out a lot more money to see them in a much larger theater. Don’t wait to see IN THE CONTINNUM.” – Terry Teachout, The Wall Street Journal