SHYLOCK was the first offering of the Perry Street Theatre Company. A riveting show that reflects the love and understanding of Shakespeare’s genius by skillfully weaving excerpts from The Merchant of Venice with a history of the demonization and anti-Semitism of Jews, conveyed with innovation, humor, wit and delight.

SHYLOCK is a unique exploration of the funny, tragic and often unbelievable life of fiction’s most famous Jew.

Mr. Armstrong has been performing SHYLOCK around the world for the past six years where it has been called  “a rich, warm and moving portrait of humanity” Dame Judi Dench,  “funny and engaging while at the same time illustrating the deep roots of anti-Semitism.” The Scotsman and  “nothing short of incredible…an exceptional piece of theatre, everyone should see it” Independent on Sunday.

“Viewers disappointed by the current film adaptation of The Merchant of Venice are hereby urged to get themselves to this stirring production as is everyone else!” – THE VILLAGE VOICE 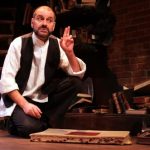